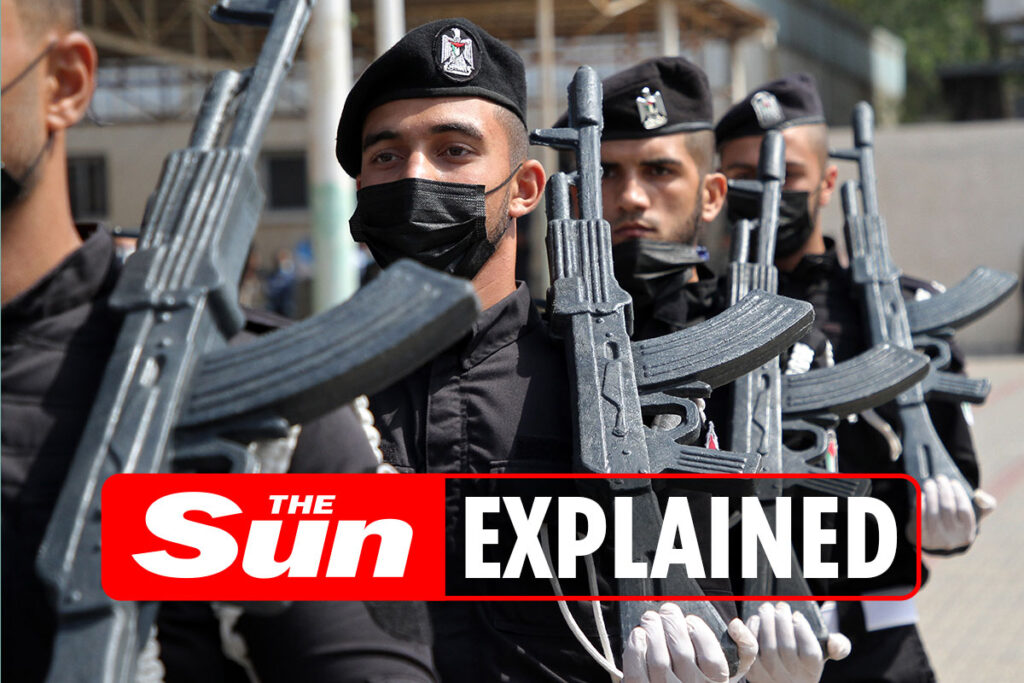 Here’s more on the organisation, the largest of several Palestinian militant Islamist groups.

Hamas is a Palestinian militant movement that also serves as one of the territories’ two major political parties, explains the Council on Foreign Relations (CFR).

Over the years, Hamas has carried out shooting, bombing and rocket attacks in Israel.

Since 2008, Israel and Hamas militants in Gaza have fought three cross-border wars and have had numerous skirmishes since the group seized control of Gaza in 2007.

Israel launches lethal military operations every so often to strike at armed Palestinian groups – the most recent in May 2021, carrying out multiple air strikes in Gaza, with the militant group firing rockets at Tel Aviv.

Hamas as a whole, or in some cases its military wing, is designated a terrorist group by Israel, the US, EU, and UK, as well as other powers, explains BBC News.

«To its supporters, though, Hamas is seen as a legitimate resistance movement», the BBC adds.

Hamas is a «resistance organisation, which is also responsible for administering the Gaza Strip», explain researchers in The Conversation.

America designated Hamas as a terrorist organisation in 1997. The United States Department of State says: «Historically, Hamas has received funding, weapons, and training from Iran and raises funds in Gulf countries.

«The group receives donations from Palestinian expatriates as well as its own charity organisations.»

Where did Hamas come from?

Its name is an Arabic acronym for the Islamic Resistance Movement – Harakat al-Muqawama al-Islamiya.

Hamas was founded by Sheikh Ahmed Yassin, a Palestinian cleric.

He became an activist in the local branches of the Muslim Brotherhood after dedicating his early life to Islamic scholarship in Cairo.

From the late 1960s, Yassin preached and performed charitable work in the West Bank and Gaza Strip, both of which were occupied by Israeli forces following the 1967 Six-Day War, explains the CFR.

This followed the outbreak of the first intifada, a Palestinian uprising against Israeli control of the West Bank, Gaza, and East Jerusalem.

Hamas later emerged at the forefront of armed resistance to Israel.

The armed element, the Izz al-Din al-Qassam Brigades, has conducted anti-Israeli attacks, including suicide bombings against civilian targets inside Israel.

Hamas also manages a broad, mostly Gaza-based, network of Dawa or ministry activities that include charities, schools, clinics, youth camps, fundraising, and political activities, explains the US Department of State.

Hamas’s primary base of operation is in the Gaza Strip, the coastal enclave of 1.7million Palestinians.

From here it has remained the de facto authority since shortly after Israel’s unilateral withdrawal in 2005, adds the CFR.

What does Hamas want?

Put very simply, Hamas refuses to recognise Israel, and wants Palestinians to be able to return to what they regard as their old home.

Back in 1988, under the Islamic militant’s group charter, the group said it was committed to the destruction of Israel.

In its founding charter, Hamas called for setting up an Islamic state in historic Palestine.

This is the territory between the Mediterranean and the Jordan River, which also includes Israel.

This founding charter was filled with anti-Jewish references.

In 2017, the Associated Press reported on the release of a «seemingly more pragmatic political programme aimed at ending the group’s international isolation».

AP added that the new blueprint stressed that Hamas bore no enmity toward Jews. It said its fight was with those occupying Palestinian lands.

Through its new manifesto, Hamas rebranded itself as an Islamic national liberation movement, rather than as a branch of the pan-Arab Muslim Brotherhood.

The document said that Hamas would accept a Palestinian state on 1967 borders.

It also dropped explicit language calling for Israel’s destruction, though it retained the goal of eventually “liberating” all of historic Palestine, which includes what is now Israel.

But, the group reaffirmed that it would not recognise Israel, renounce violence or recognise previous interim Israeli-Palestinian peace deals.

The updated policy was scoffed at by Israel, with the prime minster’s spokesman saying: «When you look at what they tell their own people on Hamas’s TV stations, in their mosques, in their schools, they are calling on a daily basis to destroy Israel.»

Israel holds Hamas responsible for all attacks from the Gaza Strip.

Egypt, along with Israel, has been enforcing a crippling border blockade against the Hamas-ruled Gaza Strip since the group seized the territory in 2007.

Israel controls most of Gaza’s borders and coastal territory, deciding who can get in and out of Gaza, including goods.

Hamas has demanded that Israel stop its restrictions.

Hamas claims Israel is occupying Palestinian land and resists occupation by launching rocket attacks from Gaza, while Israel retaliates to such attacks with further force.

Palestinians want East Jerusalem – captured by Israel in the 1967 Arab-Israeli war – as the capital of a future state.

Israel claims all of Jerusalem as its capital, a status not generally recognised internationally.

Jerusalem’s Old City, with places sacred to Jews, Muslims and Christians, is the most sensitive site in the Israeli-Palestinian conflict.

Gaza has been a site of fierce clashes between protesters and Israeli troops for decades.

The 25mile-long Gaza strip is Palestinian territory that borders Egypt and Israel.

The Israel Palestine conflict began over a dispute between land and borders.

After World War II and the Holocaust, Jews seeking their own country were given a large part of Palestine.

Arabs already living in the area didn’t accept this, so the two parties went to war in 1948.

In 1967, after another war, Israel occupied the Palestinian areas. Israeli troops have stayed there for years.

The US designated Hamas a foreign terrorist organisation (FTO) in 1997.

Israel finally left Gaza in 2005, and Hamas took control there after winning elections.

But Israel still controls most of Gaza’s borders and coastal territory, deciding who can get in and out of Gaza, including goods.

Hamas has demanded that Israel stop its restrictions.

Since splitting with its rival political party, Fatah, in 2007, the Islamist militant group Hamas has held de facto authority over Palestinians in the Gaza Strip.

Egypt and Israel largely closed their borders with Gaza in 2006–2007, restricting the movement of goods and people into and out of the territory. Israel also maintains a maritime blockade.

Until recently, a sophisticated network of more than a thousand tunnels circumvented the Egyptian crossing, allowing staples such as food, medicine, and cheap gas for electricity production into the territory, as well as construction materials, cash, and arms.

The illicit trade provided some material relief for Gazans, while Hamas levied a tax on the traffic, a major source of its revenue.

From November 14 to 21, 2012, Hamas fought another war with Israel during which it claims to have launched more than 1,400 rockets into Israel.

Despite the Egypt-mediated ceasefire between Israel and Hamas in 2012, operatives from Hamas and Palestine Islamic Jihad (PIJ) coordinated and carried out a November bus bombing in Tel Aviv that wounded 29 people.

The last Israeli ground incursion into Gaza to stop rocket attacks, was in 2014.

More than 2,100 Gazans were killed in the seven-week war that followed, according to the Gaza health ministry, along with 73 Israelis, and thousands of homes in Gaza were razed by Israeli forces.

In April 2016, a Hamas member carried out a suicide attack on a bus in Jerusalem, killing 20.

May 12, 2021: The International Criminal Court (ICC) is concerned about escalating violence in the West Bank and the possibility that war crimes are being committed there, its prosecutor Fatou Bensouda said.

«I note with great concern the escalation of violence in the West Bank, including East Jerusalem, as well as in and around Gaza, and the possible commission of crimes under the Rome Statute», Bensouda wrote on Twitter.

Hostilities between Israel and Hamas escalated on Wednesday, May 12, with at least 35 killed in Gaza and five in Israel so far in the most intensive aerial exchanges for years.

May 11, 2021: Hamas said it had fired 130 rockets at Tel Aviv after an Israeli air strike levelled a tower block in Gaza.

Hamas threatened to turn Israel “into hell” after it said an air strike on Gaza killed nine children.

Israel’s military claimed it carried out air strikes in retaliation for rocket attacks from the coastal strip, which came in the wake of clashes at the al-Aqsa mosque in Jerusalem.

Those Israeli strikes were launched after Hamas militants crossed a «red line» by firing on the Jerusalem area for the first time since 2014.

May 10, 2021: More than 330 Palestinians were wounded, according to the Palestinian Red Crescent, in renewed clashes between Palestinians and police at the mosque ahead of a planned march to commemorate Israel’s capture of Jerusalem in 1967.

May 8, 2021: Violence flares in east Jerusalem, with scuffles between Palestinians and Israeli polic

Some 121 Palestinians are wounded overnight, many hit by rubber bullets and stun grenades, the Palestinian Red Crescent says.

Israeli police say 17 of its officers are wounded.

May 7, 2021: Clashes erupted as Muslims packed the Al-Aqsa mosque to pray during the holy fasting month of Ramadan.

Violence had been building in the Holy City and occupied West Bank for the previous week.

Palestinians hurled stones, bottles and fireworks at Israeli police who fired rubber bullets and stun grenades. The site is sacred to Jews as the location of two biblical-era temples.

Forget drugs… the 6 ways to beat insomnia that REALLY work

Boy, 9, dies after being struck by lightning while playing football