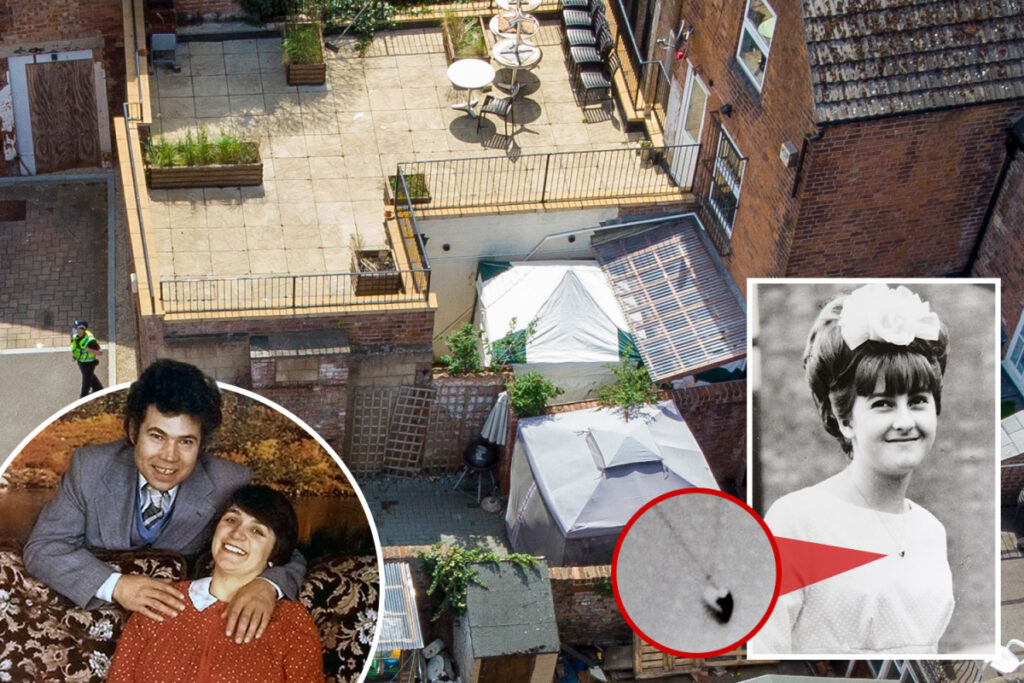 COPS began digging for a body yesterday at a cafe where serial killer Fred West was a regular and did building work.

His suspected victim Mary Bastholm, 15, who vanished in 1968, is feared buried in its basement in Gloucester.

They are excavating the basement of a cafe where she worked as a waitress and the serial killer was a regular customer.

It is now suspected that Mary, who was 15, was buried there after being murdered by builder West.

His Gloucester home at 25 Cromwell Street, known as the House of Horrors, was where nine skeletons were found ­buried in the cellar and garden in 1994.

The team — who are making a documentary for ITV — took a cadaver dog to The Clean Plate cafe in the city’s Southgate Street.

The animal reportedly reacted positively at a spot in the basement.

Ground-penetrating radar is also said to have shown a sub-surface image — apparently consistent with human remains — in the area where toilets were formerly housed.

The production company approached Gloucestershire Police last Friday with their findings and officers went to the cafe.

It was sealed off and has been under 24-hour guard since then.

A month before Mary went missing, West is said to have carried out work in the cafe’s basement, laying a concrete floor and converting an area to the side of it into toilets.

The police team is set to spend several weeks working in the basement, which is approached down concrete steps at the rear of the building.

Assistant Chief Constable Craig Holden said: “This could be a significant development on a case which has gained a lot of public interest over the years.

«On the basis of the information provided to us, we consider this to be new and potentially important evidence in the case of Mary Bastholm.

“However, further detailed assessments will take place over the following few days to determine the extent of excavation needed.

“The Constabulary has always said any fresh evidence would be reviewed.

“This has happened and a focused and proportionate investigation will now take place.”

Mary’s friends have campaigned for years for police to dig up cafe, which was previously known as The Pop In.

Childhood pal Chris Roberts said Mary knew West and had been seen in his car on several occasions.

Mary vanished on the night of January 6, 1968, while waiting at a bus stop on Gloucester’s Bristol Road on her way to see boyfriend Trevor Merrett.

She was clutching a Monopoly board game she planned to play. Several of its pieces were found on snow-covered ground near the bus stop.

A silver locket on a chain, which the family believes belonged to Mary, was subsequently found by police at 25 Cromwell Street.

The cafe first came to the police’s attention after depraved Fred and his wife Rose were arrested.

Mr Roberts said the cafe tenant at the time told cops he had found a school exercise book, possibly belonging to Mary, secreted behind brickwork in the basement’s toilet area.

He said: “The book was collected by the police but the Bastholm family were not informed of its discovery”.

In 2012, police rejected a petition by campaigners to search the cafe.

Then Chief Constable Tony Melville wrote to Mr Roberts saying: “The evidence is in no way categorical.”

He said the book found by the previous cafe tenant was an old diary that was not connected to Mary.

The police chief added of Mary’s fate: “West is the only suspect for the murder but no details about her whereabouts have ever come to light.”

A police gold group meeting was held on Monday which authorised the excavation to begin.

An archaeologist is said to be directing cops in the careful process to keep potential remains intact and preserve any forensic evidence.

A white tent was put up outside the cafe yesterday as around 15 uniformed officers and plain-clothes detectives set to work.

The dig comes too late for Mary’s immediate family, who all died without knowing what happened to her.

Mary’s brother Martin died aged 77 in 2019 and her other sibling Peter went to his grave aged 75 last year.

Peter had said that he always believed she was one of West’s victims.

He said: “I would like to find out what happened. Both my parents died without knowing what happened to her.”

A close friend of Mary’s remaining family said last night: “This has come as such a shock after all these years.

“The first we knew of the police activity at the cafe was a news alert about The Sun’s story online today.

“It would be wonderful to finally have some closure. Not a day goes by when we don’t think of Mary.

“She was such a sweet and quiet girl. We’ve always thought, ‘why her?’.

“If Rose West had spoken up, we wouldn’t have had all these years of uncertainty.

«She could have ended this years ago. That’s evil to keep people waiting.”

The friend added: “There have been petitions about searching at the cafe but nothing was done until now. There are mixed emotions that this is all blowing up again.

LIVES LOST: The victims of Fred and Rose West

The nanny of Fred and Rena West’s children, McFall was believed to have been murdered in 1967.

She was pregnant when she died, with West believed to have been the father. Her body was found in June 1994 in a shallow grave.

Fred West denied murdering McFall but he is said to have confided to a visitor after his arrest that he stabbed her following an argument.

This happened before Rosemary West met him.

With Fred in prison for the theft of car tyres and a vehicle tax disc, Rosemary was left to look after eight-year-old Charmaine.

A neighbour is said to have found Charmaine tied to a wooden chair with her hands behind her back with Rosemary standing with a large wooden spoon.

Rosemary claimed she’d been taken by her mother Rena but her skeleton was found at the Midland Road property, hidden and missing bones.

Rena is believed to have been murdered by strangulation to avoid an investigation into Charmaine’s whereabouts.

Rosemary was not charged for this murder.

Lynda Gough, 21, was the first sexually motivated killing conducted by the Wests.

She moved into Cromwell Street in April 1973, having had affairs with several lodgers. The Wests later claimed she’d been asked to leave after hitting one of their children.

Strangulation and suffocation were the likely causes of death.

She was allowed to spend the night at her grandmother’s house before a doctor’s appointment the next morning.

But she somehow ending up on Cromwell Street and was killed by the couple.

Her body was found more than twenty years later.

A 21-year-old medieval English student at Exeter University, she returned home for Christmas in December 1973.

She left a friend’s house in a rush to get the last bus from Cheltenham to Gretton on 27 December, and was abducted.

She was found more twenty years later, her dismembered body in the cellar of Cromwell Street.

She had planned to hitch-hike to Ireland in Easter 1974. Her family reported her missing having not heard from her for some time.

Prosecution believe she was abducted before being killed, with Fred West later building a fake chimney over her grave.

Just 15 at the time of her death, Hubbard is believed to have been abducted by the Wests.

Her body was found following an excavation in the concrete and plastic membrane of the cellar floor.

In the summer of 1974, Mott, 19, moved into 25 Cromwell Street but later went missing when she was living in Newent.

Her body was found in March 1994, 19 years later, with West having concreted over the floor of the cellar.

The first victim buried outside the house, Robinson had an affair with Fred West, and by autumn 1977, she was pregnant with his child.

It was initially claimed the 18-year-old had moved to Scotland but her body was later found.

When questioned, Rosemary West, herself pregnant with her daughter Tara at the time of the murder, claimed she did not remember her, which was described as “ludicrous” by the prosecution.

The last murder with a sexual motive established. She disappeared just before her 17th birthday, having been seen at 25 Cromwell Street throughout the summer.

Her body was buried underneath the patio.

The first child born to Fred and Rosemary West, there is no evidence the 16-year-old was aware of the killings.

Sexually abused by her parents and having told friends, she suddenly went missing in 1987, with Rosemary claiming she had gone to Wales to be with a lesbian partner.

The couple would joke to their other children that they would “end up under the patio like Heather” if they misbehaved.

This – and Fred’s abuse of his other daughter – led to the search warrants for the property, and subsequently to their arrests.

“But let’s hope we learn the truth, and Mary can finally rest in peace.”

Fred and Rose West are feared to have tortured, raped and murdered up to 30 girls and young women.

He killed himself at Birmingham’s Winson Green jail on New Year’s Day 1995 aged 53 while on remand charged with 12 murders.

He had reportedly confessed to murdering Mary to son Stephen and Janet Leach, a social worker.

As well as nine skeletons at his home three other bodies were uncovered at West’s previous home in Midland Road and two fields in Much Marcle.

Boy, 9, dies after being ‘struck by lightning’ while playing football

Burglars held gun to baby’s HEAD as they tortured Brit mum, 20, to death

Rose, now 67, was in 1995 convicted of ten murders and is held at New Hall Prison, West Yorks.

Her solicitor Leo Goatley believes she met Fred two years before previously thought — when just 14 – and could have been involved in Mary’s murder.

The Clean Plate cafe is run by local addiction charity the Nelson Trust. Its CEO John Trolan said his thoughts were with Mary’s relatives.

JANUARY 1968: Mary vanishes aged 15 while waiting for a bus to meet her boyfriend.

FEBRUARY 1968: Scotland Yard detectives called in to investigate Mary’s disappearance return to London with no sign of her.

Nine bodies are found and Fred West is charged with murder. Police are then informed of a potential link to Mary’s disappearance and the café.

JANUARY 1995: Fred West kills himself in jail while awaiting trial for 12 murders.

MAY 2021: TV documentary makers find new evidence of Mary’s remains at café. Police begin a dig at the scene.

Fred West cops dig at cafe amid fears new victim Mary Bastholm, 15, could be buried there