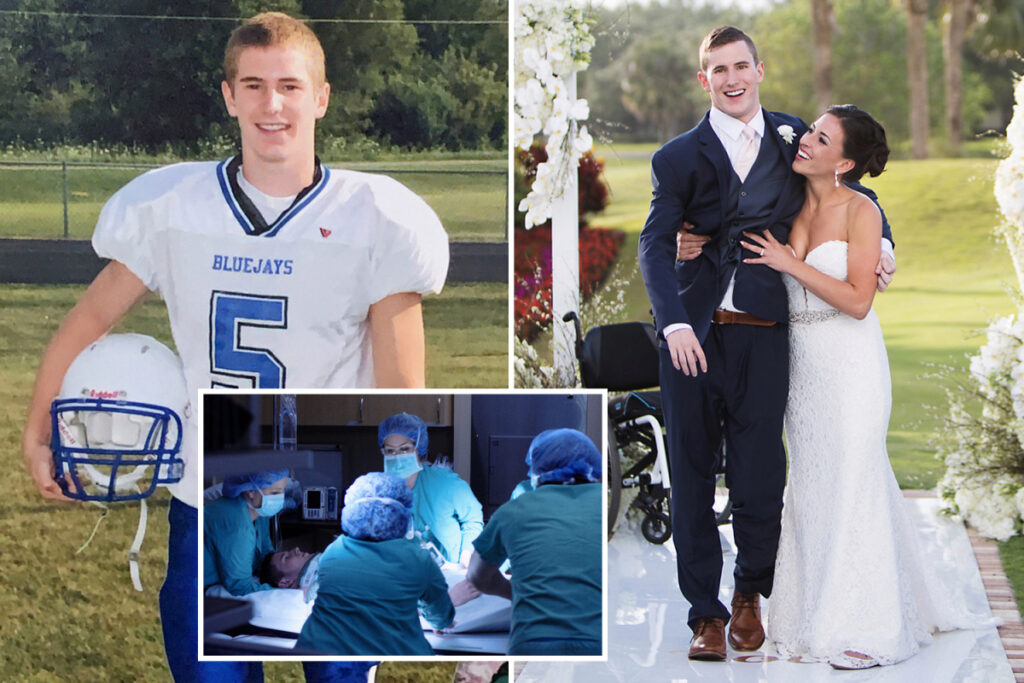 POWERING down the football field, Chris Norton had his eye on the ball and a determination to take down his opponent as the crowd roared their support.

Seconds later, the sporty 18-year-old was lying on the ground, paralysed from the neck down and facing a bleak future, unable to feed himself or even scratch his own nose.

Given just a 3 per cent chance of ever experiencing feeling or movement below the neck – let alone walking – Chris, from Iowa, could have let the 2010 accident end his hopes and dreams.

But with a steel will, and the help of his fiance Emily Summers, he walked on stage at his graduation ceremony, five years later and, in 2018, he fulfilled a heartfelt vow when he walked his bride seven yards down the aisle at their beautiful wedding.

Chris’s inspirational story is told in a new Netflix show, 7 Yards: The Chris Norton Story, which documents his despair at being cut down in his prime and his dogged determination to get back on his feet for the couple’s big day.

Now a dad of seven through adoption and fostering, tells the Sun that hard work, training and a positive mental attitude have helped him overcome huge obstacles.

“It took me time to realise that happiness isn’t measured by steps,” he says.

“Every day, I focus on my abilities and not my disabilities, the things I can do, not what I can’t. That’s what gives me my positive attitude.”

Tackle that changed life in a second

Growing up in a close-knit family in Iowa, Chris was an active kid, playing with sisters Katie and Alex in the park, cycling and taking on every sport he could – including baseball, basketball, football and American football – coached by dad Terry.

Describing himself as the “ultimate competitor” he adds, “Sports was really important to me. I was always competing, always doing something social.”

In October 2010, Chris had a promising future in American Football when he joined his college team for the sixth match of the season, watched by his family

But the cheers turned to horror when Chris went in for a tackle and mistimed by a split second, hitting his opponent’s legs with full force and snapping two vertebrae in his neck.

“In an instant, I lost all feeling and movement from my neck down,” he recalls.

“I was listening to the players crash into each other above me, and then the whistle blew and I tried as hard as I could to push off the ground but I couldn’t move.

“It felt like someone just flipped the power off to my body. I was completely conscious, my head wasn’t hurting and I didn’t have any ringing or concussion symptoms.

“More than anything, I was embarrassed because I didn’t want to be the player lying on the ground stopping the game.

“Paramedics came and were asking me to make a fist and saying, ‘can you feel us touching your legs?’ I couldn’t feel a thing.

“Fear started rising inside – and then they called for a helicopter. That’s when I knew this was bad, so I closed my eyes and tried to escape reality because I couldn’t accept what was unfolding before me.

“I was loving my life, I did not want it to change.”

Chris was rushed to hospital where he underwent surgery to fuse the bones in his spine.

“I woke up after surgery, blurry-eyed and groggy, thinking I just had the worst nightmare of my life,” he says.

“The surgeon came in and confirmed that my nightmare is now my new reality. He told me I had a 3 per cent chance of ever regaining any feeling or movement below the neck.

“It was so surreal, I could hardly process it. The day before, at the same time, I was suiting up for my college football game.

“At first I was numb and then I got mad. I told myself ‘I’m going to beat the odds. I will not be part of that 97 per cent who don’t recover from this.”

The teenager began moving his head as much as he could – joking he looked like a “giant bobblehead” – and managed a minute shrug of the shoulders.

But while Chris’s parents Terry and Deb and his two sisters were constantly by his side, giving him pep talks and telling him he would recover, he quickly sank into despair at night.

“My lowest moments were trying to sleep at night, because that’s when my fears and doubts come in and I’d think about my future. Will I ever go back to school? What girl ever want to be with me? Will I ever be a dad and have my own family?

“Every night, I cried myself to sleep and I couldn’t even wipe the tears from my eyes. I had to have someone do that for me.”

On the fourth night, however, a kindly nurse called Georgia came to check on him, at 2am, and changed his life.

Kneeling down by his bedside, she told him: “Chris, look me in the eyes.” Then she said, “I’m from Wyoming and people from Wyoming don’t tell lies. I want you to know you will beat this. You WILL beat this.”

“I instantly started crying,” says Chris. “I needed to hear those words so badly because up to that point, I was questioning whether all the time and effort I was putting into my recovery would ever pay off but this woman really helped restore my confidence and just go for it.

“I discovered just how much impact one person and four words can really make.”

After three months in hospital, Chris moved to a Ronald McDonald house – a charity-run home for sick kids and their families – while he began treatment at the Mayo Clinic in Rochester, Minnesota.

Determined to move his limbs again, Chris began with an hour’s therapy a day and worked up to three, then four. When he was refused a fifth hour, his physiotherapists gave him extra workouts he could do on his own.

“If I wasn’t sleeping, I was working,” says Chris. “I understood the future will take care of itself when you take care of today.

“It’s up to me where I go in life, and how my recovery turns out so I just kept maximising every opportunity to do one more thing because one extra step can make the biggest difference.”

As Chris continued to grow stronger, an online romance blossomed with Emily,

“Emily’s not a surface level person, she goes deep, asking the hard-hitting questions acquaintances and friends often avoid,” he says. “She wants to really get to know people for who they are and that just drew me to her.

“When we first met, in person my jaw dropped. I couldn’t believe how beautiful she was. I had to try and play it cool, make sure she didn’t know she’s way out of your league.

“I had so many insecurities because of the physical challenges I was up against, wondering whether a girl would look past that. But she didn’t care, she just wanted to know me as a person.”

As the couple grew closer, Emily threw herself into helping Chris achieve a dream – walking onto the stage at his graduation ceremony.

“Emily was my toughest trainer. She was always pushing me to take one more step, do one more walk. And eventually, she could walk me better than any professional physical therapist.

“My dream to walk across the stage became her dream as well. It’s really special when somebody that you love cares that much about your own goal.”

Emily found a brilliant training facility for Chris, 12 hours from his Iowa home, and relocated with him to help him prepare for the graduation walk.

On the day before the graduation, Chris planned a surprise proposal, hiring a banqueting room and getting his family to decorate it, with rose petals spelling the words ‘Marry Me’ and their favourite song, John Legend’s All Of Me, playing as Emily walked in.

“Thankfully she said ‘yes’ – otherwise the graduation the next day would have been really awkward.”

The video of Chris collecting his degree and walking across the stage, in 2015, went viral, with over 3million views, and he was blown away by the reaction of his friends and family.

“On the day I was so nervous I was almost sick,” he says. “Graduations are so long I was worried I’d get booed off stage for being too slow.

“But when Emily stood me up the whole room erupted into a roar of applause and cheers and clapping, which gave me a little extra fuel to the fire.

“When I got to the end, I looked up to accept my diploma and acknowledge the crowd’s support and everyone was crying, from my mum to my best buddies and people I’ve never seen cry.

“I had no idea how emotional and powerful that moment was for so many people.”

Chris’s next goal was to walk his fiance down the aisle and he made a vow to complete a full seven yards.

As the 2018 date approached, the documentary team had already come on board and named their film 7 Yards.

Chris embarked on a gruelling training programme, training four to six hours a day and practicing walking beside Emily instead of behind, as he had for the graduation.

“The wedding day was incredibly special,” he says.

“It was different from the graduation walk because we both felt so much peace. We knew that, regardless of what happened, even if we tripped and fell over, we had each other. It didn’t matter what obstacles or challenges we faced, we were going to go through life as a team.”

Dad to seven and inspiration to many more

Coming from a loving, supportive family Chris – who is now a motivational speaker and runs a charity called the Chris Norton Foundation – has always wanted children.

Emily, who has worked with kids in care since leaving school, was always keen to foster and adopt.

Incredibly, the pair are now parents to SEVEN kids through foster and adoption – 22-year-old Whitley, who they fostered at 17, Eva, 11, Lily, Izzy, seven, Tafari, seven, Arianna, five and two-year-old Keandre.

Chris has recently set up camps for kids in wheelchairs and their families, where they can all take part in activities from horse-riding and clay pigeon shooting to zip-wires and laser tag.

He is still unable to walk unaided and is in a wheelchair the majority of the time, but his amazingly positive attitude has proved an inspiration for so many.

“I had a great dad who taught me how to shoot a basketball and swing a bat and play soccer and those are all things that I want to do with my kids, but I can’t,” he says.

“That’s probably one of the most painful things I have to endure but I refuse to allow what I can’t do paralyse me from doing what I CAN do.

“I know I can be a present, loving dad, I can be their cheerleader, somebody who encourages them and brings them up. That’s the most important dad you can be.”

7 Yards: The Chris Norton Story is now available on Netflix